Landsdale students represented our school with great pride and effort at the interschool athletics carnival in some trying conditions. We caught up the points from Tuesday's Jumps and Throws and managed to finish second.

The final standings were:

Carnaby Rise won the meritorious shield for the most improved from last year’s result.

Due to the forecast of poor weather approaching on Thursday afternoon, we have re-adjusted the faction carnival program. The major difference is the division 1 races will be held first up in the morning, following the kindy and pre-primary races. All rotations should conclude by 12.45pm with presentations after lunch at approximately 1.30pm in the undercover area, if need be. This is the ADJUSTED carnival program2019 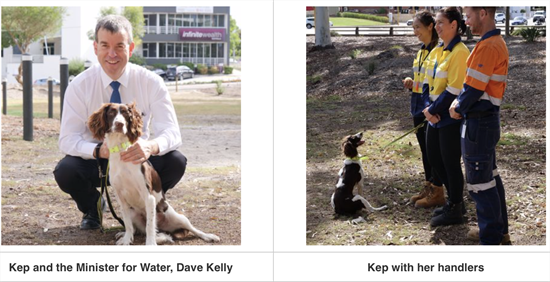 The Year Two students had an incursion for the Water Corporation in term 2 and after the visit students and parents continued their learning through a "Water Wise" investigation at home to be aware of water leaks. Students then returned their competition sheets to enter in the "Win a visit from Kep the water detecting dog".

I am thrilled to announce Landsdale Primary School won the competition. The water corporation with Kep and her handlers will attend the school for a special Junior Assembly for Kindy, Pre Primary, Year 1, Year 2 on Thursday the 12th September at 9.15am.

After the school assembly the year two students will observe Kep at work. As a condition of winning this prize, our school is requested to participate in publicity, including a photo for a media release; social media and Water Corporation’s website. Some photographs to be taken on the day of the visit.